Is the teaching and example of Jesus seen in our lives and heard in our words?  That was one of the main issues raised at this years Scottish Reformed Conference held on 9th May at Hamilton College. 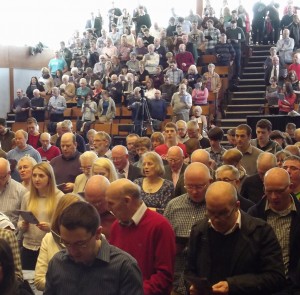 Around 500 people of all ages gathered to praise God and hear His word being expounded by Kevin DeYoung and Steven Curry.  One of the main features of the SRC is a commitment to relevant and robust Biblical teaching; this was once again in evidence at this year’s conference.

Kevin DeYoung is the Senior Pastor at University Reformed Church in East Lansing, Michigan, located near Michigan State University. He serves as a council member at The Gospel Coalition and blogs on TGC’s DeYoung, Restless and Reformed as well as being the author of many well received books.  At the conference Kevin dealt with the themes:  Christ, Christian and the Word of God and turned to Matthew chapter 7 to emphasise that Jesus ‘fills up and fills out Scripture’.  A timely reminder of the absolute authority and sufficiency of the Bible was also given as we were reminded of the astonishing authority of Jesus.  Followers of Jesus obey Him, gather with other Christians and make new disciples.  Our lives are to be about Jesus; Kevin declared that “You don’t have to be with it, you have to be with Him”.

Making a very welcome return to the conference this year was Steven Curry from Northern Ireland. He has been pastor of Bethany Baptist Church in Bangor, his home church since 2008, after serving the Lord, in blessed fashion, for 23 years in the town of Ballymoney. Steven is known for his strong and heartfelt commitment to the practice of faithful, biblical exposition.  Following on from Kevin’s message from Matthew chapter 6, Steven also directed our thoughts to the Sermon On The Mount and reminded us that what we are in public should mirror what we are in private; our Father in Heaven sees us as we are.  A challenge to resist self-promotion was given as well as a reminder that Christian’s should not be driven by the approval of others but rather by the glory of God.  ‘God sees beyond the veneer of our lives’ was a particularly powerful statement.

People attended the conference from all over Scotland, the north of England and Ireland. In addition we had people from West Africa and Singapore. All denominations were represented as well as many independent churches. It was a joy to meet with believers who, though they came from different church traditions, joined together as one church to praise God for who He is and to listen to what God has said and is saying in His Word.